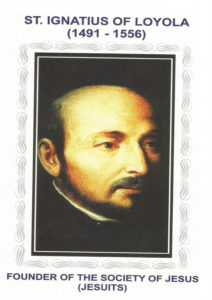 St. Ignatius of Loyola, the Founder of the Society of Jesus, was born in 1491, into a noble Basque family in Northern Spain. His early upbringing was in a court. In 1517, he left his life at the court to enter the army to be a soldier in the service of the Spanish king, Ferdinand. While defending the fortress at Pamplona in 1521, his leg was shattered by a cannon ball. During a prolonged and painful convalescence, for want of ‘romantic books’ at castle, he seriously went through two books that would exert a powerful influence over his mind and heart: ‘The Life of Christ,’ and the ‘Lives of Saints.’ While reading these books, he experienced an interior transformation that changed his whole life. Inspired by the courageous surrender of the saints to the will of God and to a life of poverty, he decided to forsake his possessions and live the life of an ascetic in search of God.

He found a model in Jesus Christ, the inspiration of his life. He prayed, studied and worked for many hard years, so that he might lead others to live in a manner which was at once more fully human and more fully divine. He preserved a record of his spiritual experiences there, which evolved into a booklet , ‘Spiritual Exercises,’ which was used by him and later by his fellow Jesuits, to lead others to God by meditation on the life of Jesus. It is basic to the formation of every Jesuit.

Ignatius gathered a group of young men who shared his vision, at the University of Paris. He eventually founded the Society of Jesus, an influential and dynamic religious order. He was an organizational genius. He dedicated the last sixteen years of his life in governing, in finalizing the Constitutions of the Society, in enormous correspondence and in guiding the expanding Order. He died at the age of 66, on 31 July 1556.